Geographic confusion continues along the border with news organisations filling in blanks of knowledge on a ‘best guess’ stab at what might be almost right. 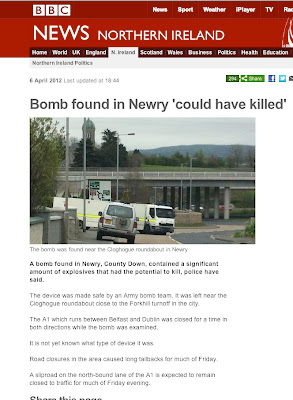 Tonight, the Frontier Post antennae went up when we saw a news item on BBC about an explosive device that ‘could have killed’ at a roundabout on the AI Dublin to Belfast road.
The report said that this was at ‘Newry, County Down’. However, the actual location was at the Cloghogue roundabout.
Now those of us who were held up – both delayed and detained – many times in the course of our duties during the recent conflict are familiar with the location of Cloghogue. A huge British Army checkpoint grew up there over the course of those years, eventually surmounted by one of those big observation towers festooned with surveillance equipment for watching and listening.
It was not something you could have missed noticing either even driving by on the AI.
Today, it seems, Cloghogue is just a roundabout, so anonymous in peacetime reporting that it has shifted counties. For if somebody had done their homework before placing it so definitively, they would find out that Cloghogue is in County Armagh.
The confusion is hardly surprising, since everywhere prefaced by the name of Newry is now assumed to be in County Down, although about half of the town/city remains in Armagh where it has always been. Yet that is not the greatest infringement of geographic confusion along the Border.
South Armagh is included in the Newry and Mourne district for administrative purposes and also for modern postal addresses that operate on a postcode numbers rather than actual places on the traditional map which in rural areas was composed of townlands.
So Crossmaglen, served from Newry, is transferred to Down, along with Forkhill, Camlough, Newtownhamilton and other communities. No wonder there were frequent reports of map-reading errors down the years from squaddies who could not hope to rely on places staying in the one spot!
The civil rights activist, guide, publican and wonderful raconteur Paddy Short of Crossmaglen used to marvel about the geographic displacement caused by substituting townland names with postal codes and signs for arbitrary road names.
One such wonder was in his native townland of Lurgancullenboy, which had been designated as ‘Lurgan Road, Crossmaglen, County Down’ in the official housekeeping.
Paddy laughed heartily at that, pointing out that Lurgancullenboy was still in County Armagh and anybody taking that road would be going off in the opposite direction of Lurgan which, for those who do not have a good map handy, is in the north of County Armagh and quite near both County Down and County Antrim.
In fairness, the geographic confusion it’s not just a Border problem. Anywhere north of Drogheda seems to be a grey unknown area for many in the Dublin media, just as Belfast media can barely see beyond Dromore – that is the one in County Down for our Tyrone followers.
Maybe the ultimate justice in this is that current events in the Titanic Quarter are assumed to be happening in Belfast, County Antrim, while they are actually happening in County Down.
Such careless navigation might even explain how somebody could have missed a big iceberg! Surely if so many can misplace a roundabout, and an entire city or two, what chance is there of pinpointing a big lump of frozen water on a vast and dark Atlantic Ocean?
Back on the Border, but in the north-west this time, Traditional Unionist Voice leader Jim Allister was in Newtownstewart last week sounding off to his vast coterie of West Tyrone followers (well, almost a dozen). His clarion cry was that any improvements of the A5 road, which runs from Derry city to the border at Aughnacloy, ‘will create a united Ireland by road’. Mind you, this is after the Dublin government has withdrawn funding from the project, notwithstanding that it would vastly improve access to and from Donegal. Now it’s just Jim Allister ranting about a major road project for the use of people west of the Bann. Somebody must have misplaced his map too.
There are persistent culprits when it comes to this ‘pin in a map’ guesswork. They needn’t think we don’t notice at the Frontier Post.
Posted by Darach MacDonald at 01:09