Who gives a 'thrupenny damn' for the Irish hare? 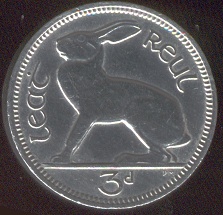 HARES would be well advised to remain on the northern side of the Border where they will be cosseted and cared for as a protected native Irish species. By crossing over into the Republic, they face the risk of being harried and hunted down for sport.
It is one of the great anomalies of our land that the two jurisdictions take such a divergent approach to blood sports. A former newspaper colleague in Dublin once observed that the reason for the pervasive political deference to the bloodlust of coursing fans was the annual conclave of Roman collars in the crowd at the National Coursing Meeting in Clonmel – the Hare of the Dogma, if you will!
Clearly the bastions of church and state don't give a thruppeny damn for the indigenous species once depicted on that Irish coin.
I am not aware if attendance at Clonmel has diminished since the dogs were muzzled in 1993 after an outcry following photos and film footage of a couple of greyhounds pulling a hare limb from limb in a gory display of triumph. Now the dogs can only frighten the wits out of their unfortunate quarry as the baying crowds cheer them on.
For coursing hares and hunting stags and foxes remain the preserve of country pursuits in Ireland with the latter defended as control of vermin. As if other means of culling wildlife were less efficient or humane than a bunch of Hoorah Henrys and Henriettas galloping  their horses over the countryside – the unspeakable in pursuit of the uneatable, as Oscar Wilde so aptly put it .
Thankfully, badger-baiting has been outlawed in both jurisdictions, although it is still conducted covertly – with cock-fighting and dog-fighting – along the Border by those who would doubtless defend bear-baiting on the pretext that our bear population might otherwise get out of control.
As for hare coursing, Dublin’s Minister of State for Agriculture Shane McEntee has defended it robustly, describing it as part of our Irish way of life (contrary to evidence that it was introduced by British Army officers at the Curragh in the early 19th century.)
‘We have to make sure no one comes near to taking that away from us,’ the Irish junior minister said earlier this month. His remarks were prompted by news that two independent Dáil Deputies will table a Private Members Bill before Easter to have hare-coursing banned, following disclosure that a public park in Milltown, Co. Cork is used for the blood sport.
Chief executive of the Irish Coursing Club, D. J. Histon said that a Department of the Environment survey in 2007 found a population of 565,000 hares in Ireland and coursing clubs required 1% of these. That’s 5,650 hares harried and chased merely for the pleasure of the coursing crowd.
The Hare Preservation Trust, meanwhile, estimates that the population of the Irish species is falling by 25% every three years.
The southern minister of state insists, however, that hares are ‘not an endangered species’.
That will come as news in Northern Ireland where a ban on coursing introduced in 2003 under direct rule, has been continued by subsequent minister such as the DUP’s Arlene Foster, despite trenchant opposition and repeated attempts to overturn it by Sinn Féin.
Now the opposition to hare coursing is strengthened by the worrying news that a number of native wildlife species, including the Irish hare, face extinction if protective action is not taken throughout the island.
The alarm also includes the already depleted red squirrel and red deer which are also in danger of extinction, according to a two-year study by scientists at Queen's University in Belfast (http://www.bbc.co.uk/news/uk-northern-ireland-17099536).
Led by Prof. Ian Montgomery, the research team at the School of Biological Sciences in Queen’s found that invasive species pose such as threat to indigenous Irish wildlife that some species such as the pygmy shrew have vanished in many parts of the island. Wood mouse numbers have also dropped by 50% in places.
The Queen’s University research team leader described an ‘invasional meltdown’ in the international scientific journal Biological Invasions, claiming that native small mammals in Ireland would die out in at least 80% of their available habitat.
Prof. Montgomery stressed the importance of small mammals in the established food chain and urged joined-up action to redress the biological balance.
‘Governments, both north and south of the border, are urged to work together to address the overall problem,’ he said, saying that invasive mammals pose a risk throughout Ireland.
‘We should establish a realistic plan identifying the mammal species that are key to maintaining our unique biodiversity and ecology and those that we should eliminate or control.’
Few could possibly argue that one of the species we must protect and promote is the Irish hare, but its welfare now depends on which jurisdiction it lives in. Like most of the inhabitants of this island, however, hares are unaware of the Border that protects them for now.

Posted by Darach MacDonald at 12:13