Laying claim to Patrick and parades

It was a village parade on the evening of St Patrick’s Day, a family celebration with marching bands, lilting music, colourful costumes and a shared aim of honouring Ireland’s Christian patron.
If it differed from other 17 March processions that day, it could have been because it was bigger than most with dozens of bands playing jigs and dance tunes in march time as they completed the parade circuit.
Or perhaps it was because there was such strict order in the proceedings, tight discipline in the ranks, careful marshalling of participants and onlookers, and no signs of rowdy drunken revelry even among the small groups gathered around the doors of the two pubs at the top of the village. 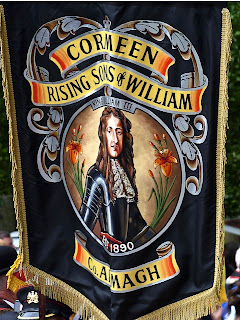 I was there on that 17 March night in 2009 and I wrote a detailed description of it in my book, Blood & Thunder: Inside an Ulster Protestant Band.
Oh, that was another difference from all the other parades covered by the local, regional and national media. It was the annual parade organised by a Loyalist marching band, the Cormeen Rising Sons of William, in the small village of Killylea, outside Armagh City.
It was the first Loyalist marching band parade I attended that year, the recognised curtain raiser for similar local band parades that dominate the lives of band enthusiasts in the Ulster Protestant community – on both sides of the Border – right through until October. A similar St Patrick’s Day parade with dozens of Loyalist bands is held in Coleraine.
The Cormeen Sons are organising their parade again this year and, because it will be bigger than ever, they decided to switch the venue from their small Border village to their small local city. Their opponents are affronted.
Local Sinn Féin MP Conor Murphy calls it a ‘disaster’ and says it should have been a ‘no brainer’ decision for the Parades Commission to ban it completely.  He dismisses the police finding that there is no local concern about the parade.
So what is the problem exactly, apart from the fact that this will be a tightly controlled celebration of St Patrick by Ulster Protestants who have long said they do not feel comfortable with the appropriation of St Patrick for what has become a ‘nationalist celebration’?
Some of them even argue, with justification, that their parade in honour of St Patrick is closest to the original – the parade by British army soldiers through the British colonial streets of New York on 17 March 1762, an event now appropriated by the Ancient Order of Hibernians!
The Loyalist bandsmen are far from strident, appealing for calm and reason.
It is not as if they plan to take over the streets for their occasion. The Cormeen Rising Sons of William applied many months ago to host their celebration in Armagh City; filed the appropriate notification with the Parades Commission; provided details of participants, route, likely attendance, marshalling arrangements, start and stop times; and they even augmented all this with professionally prepared commercial and community impact assessments.
When the Parades Commission sought changes, they complied without protest. They also gave a firm commitment to abide by the Parade Commission’s final decision no matter what that might be.
Heck, the Cormeen Rising Sons of William even issued repeated invitations to Sinn Féin and the SDLP to talk with them, so that they might allay any fears about their motives or arrangements.
In extending the invitation, the band reminded Sinn Féin of its own Charter for Unionist Engagement. So while the SDLP fulminates in private, the band accompanied by local DUP MLA  William Irwin, met Sinn Féin in Armagh City this evening (Wednesday). Afterwards, the band isued the following statement: 'Regretfully no agreement could be reached. Sinn Féin's sole proposal was the exclusion of the event from the city on St Patrick's Day. Exclusion has been the root cause of many of the communal problems in Northern Ireland over the past decades, and we feel to reignite another cycle of that nature would be irresponsible.'
However, the Cormeen Rising Sons of William added, 'We have, however, taken the apprehensions of Sinn Féin on board and will make extra efforts to ensure the procession passes peacefully.
'The way forward to a shared future is acceptance of each other's cultural practices and traditions. We would sincerely urge all those in Armagh on Saturday to exercise mutual respect for each other and not repeat mistakes of the past; mistakes which have benfitted no-one.'

So what will happen on Saturday? The Loyalist band world is buzzing with rumours of republican protests being organised. Republicans are affronted by what many of them see as a bid by Loyalists to ‘hijack our holiday’. Despite claims to the contrary, many still clearly believe that suppressing and bullying another culture is the best way to earn respect for theirs, and no decisions by the Parades Commisison should count except those for their side. Even in an episode that seems to fit perfectly with the ideals of parity of esteem, hands-off adjudication by an independent body, cross-community dialogue, face-to-face encounters to air and settle greviences and clear commitment to community peace, the parade is opposed by what seems to be a dog-in-the-manger insistence that it is 'provocative'.
But even so, the bands are getting ready to celebrate St Patrick in his own city with the parade setting off around 7pm on the route from Mall East through Gaol Square, Barrack Street, Scotch Street, Market Street, College Street and ending up on the West Mall.
‘The band will fully comply with the (Parades Commission) determination on Saturday evening, and will be working with the PSNI to ensure it is an enjoyable and trouble free evening for all,’ said spokesman, Quincey Dougan, who is also a highly popular weekly columnist on the culture and proceedings of marching bands for the Belfast daily newspaper, the News Letter.
‘St Patrick is the patron saint of all of Ireland and all of its people,’ Quincey reminded us all. ‘We fully respect the rights of others to celebrate according to their own traditions, and in turn would ask that they respect ours.’
And my plans? Oh, I’ll be in Armagh City to enjoy another annual parade of the Cormeen Rising Sons of William and I'll enjoy seeing our other great Irish cultural tradition honour the patron saint we all share.
Posted by Darach MacDonald at 21:26