Seeking truth from Border 'blind spot' and a screen of senationalism

Here at the Frontier Post, we have been following with considerable interest the tribunal investigating the background to the bloody ambush of two senior Northern Ireland police officers on the Border in 1989. Today, in a dramatic turn on the 23rd anniversary of the IRA assassinations, the hearings in Dublin were adjourned by Judge Peter Smithwick.
No resumption date has been set and it is expected it won’t be until the tribunal receives British intelligence information which Judge Smithwick described in his recent interim report as ‘highly relevant and potentially significant’.
Before adjourning the public hearings, which began on 7 June last, Judge Smithwick said he is now ‘totally dependent’ on that information. This suggests that the British intelligence report can determine between the counter-claims on whether former Garda Detective Sergeant Owen Corrigan provided information needed by the IRA to kill Chief Superintendent Harry Breen and Superintendent Bob Buchanan on the afternoon of 20 March 1989.
The Smithwick tribunal inquiry is taking place on foot of this allegation raised in the British House of Commons, following ‘disclosures’ by a journalist/author and a preliminary report on collusion on both sides by Canadian Judge Peter Cory. It has also been taken up by a ‘colourful’ former British agent in the IRA.
Even as the plot thickens, however, there has been some light shed on a dark period of our recent past along a Border that seems even more intricate than the rival plots.  Solicitor John McBurney for Chief Superintendent Breen’s family, says a much fuller picture of what ‘was known and seemingly ignored or withheld with regard to this tragedy’ was now emerging and the detail was ‘almost impossible to comprehend’.
But let us consider some of the evidence. Just before today’s adjournment, a retired British major, Witness 79, testified from behind a screen. He commanded British troops in the district on the day the two senior RUC officers were killed outside Jonesborough at 3.40pm as they returned from a meeting in Dundalk garda station. The former c/o says he was not aware of the police travel plans and these would have been strictly on a ‘need to know’ basis.
Witness 79 confirmed there were a number of army patrols operating in south Armagh, where the Army retained prime control long after the police had been pushed into security frontline in other parts of Northern Ireland. As well, there was contstant helicopter surveillance and the watchtowers on Jonesborough and Forkhill Mountains monitoring cross-border traffic. The attack took place in a ‘blind spot’, however, and Witness 79 suggests local people might not have known this.
On that basis he seemed to support the Garda mole theory that it would have required the risky deployment of too many IRA personnel to monitor all the local roads for the RUC officers’ unmarked car. A British army Brigadier had already gauged that this might have involved 70 IRA lookouts.
Now I’m not a trained intelligence officer, nor am I even Toby Harnden, fugitive author of Bandit Country (1999), allegedly based on an awful lot of innuendo, tittle-tattle and information acquired in dubious circumstances through a personal relationship. The Garda ‘mole’ is central to Bandit Country, but Harnden – a former Royal Navy officer who has since written a book about Britain’s war in Afghanistan – last month declined to help the Smithwick inquiry. 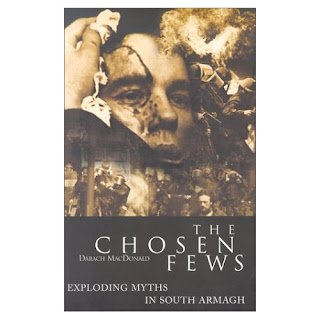 Yet I’ve also written a book about the locality. The Chosen Fews: Exploding Myths in South Armagh (2000) was based on my experience of reporting on south Armagh since the mid-1970s backed up by diligent research. This involved frequent and repeated journeys in the district while the elaborate network of British army watchtowers was still in place. I often used Edenappa Road and other known blind spots, precisely because they offered a brief respite from constant monitoring.
So it strikes me that the collusion theory in these killings is based on lack of local knowledge and the pre-supposition of an intricate web of alternative routes that would be almost impossible to monitor.
So let’s consider other facts presented at the tribunal.
The IRA was in ‘communications overdrive’ from 11.30am that day, roughly the time Chief Superintendent Buchanan arranged the meeting on an ‘open and unsecured’ phone call to Dundalk garda station. The two RUC officers used Buchanan’s personal red Cavalier car, registration KIB 1204, which he had previously used for every one of 24 previous cross-border rendezvous with gardaí. They stayed in Dundalk for roughly one hour – meeting Garda Superintendent John Nolan – before setting off back to the border.
Based on that information, a single look-out in Dundalk could tell what road the red Cavalier was taking. That is even discounting that the policemen were tailed by a cream-coloured van from which the four gunmen leapt at the bogus British checkpoint at the Border blind-spot on the Edenappa Road.
Yet we now await the British intelligence report which, one presumes, pre-dates the ‘exposure’ of collusion in Toby Harnden’s book, then backed up by another journalist of rather intemperate views on such matters and a British agent who has long exhausted the sell-by date on his franchise.
Of course, this is not to preclude the existence of an IRA mole in Dundalk Garda station, nor does it discount the elaborate preparations of the IRA in south Armagh whose enemies point out was ‘risk averse’ and very deadly. Conspiracies and collusion are always plausible in a dirty war.
Yet what happened in the deadly war along the Border does not need to be dressed up any more. So we can only hope that this hugely expensive tribunal might yet provide a clear picture from behind the screen of sensationalism that always seems to sell better than the bare truth.
Posted by Darach MacDonald at 22:13