Airport ordeal at the Gates of Hell

It has pride of place on top of my low bookshelves where it now nestles snugly amidst a half-dozen other bottles. It is called simple ’93.50’ and its label promises that it is so ‘huge on the palate’ that one of the judging panel described it as ‘hot embers at the gates of hell’.

I got it yesterday as a belated but much-appreciated Christmas gift from my son Sam. Apart from being a young gentleman and scholar, Sam is now a professional 'judge of good whisky'. He works for the Scotch Malt Whisky Society in London which offers this superior single malt whisky (58.6% vol) from a single cask that produced only 275 bottles. When these bottles are imbibed, this wonderful whisky will never exist again.
Choosing the ’93.50’ was not undertaken lightly. It followed several days of devoted research on my part, and diligent guidance on Sam's at the society’s private club in London.
After the appropriate tastings, I chose '93.50' because I like its full flavours of black pudding, roast pork, cherries and liquorice. This is a full Haggis main course, followed by dessert in one glass raised in a toast to the wonderful craftsmanship that created it by distillation on 17 April 1991 and the miraculous alchemy wrought over 20 years in an oak barrel.
This certainly is not a whisky to glug, gulp or adulterate with anything more than the merest hint of pure water to release its spiritual essence.
Yet when I get around to breaking the seal and pouring myself a dram of this malt nectar, I know already that it will leave a sour note.
That is because it cost more to transport across the Irish Sea than the price of my own flight from London to Belfast.
Let me explain. After several direct and indirect promptings, I availed of the Aer Lingus special offer of a £19.99 singe journey flight each way to see Sam who had not been able to make it home for the Christmas/New Year holidays. I stayed with him from Saturday until today (Wednesday) and only brought carry-on luggage, more than sufficient for my needs as well as a couple of gifts for Sam and his girlfriend India.
For my return, however, I had the ’93.50’ to consider. I wrapped it carefully in my thick wool and silk scarf and surrounded it with laundry in the middle of the bag to ensure it would come to no harm in transit.
But it is not that simple. Some bull-necked genius in the world of aviation has presumed that I might pose a threat to fellow passengers, as well as the crew, using a bottle of superb scotch as a weapon during the one-hour flight. I could not be trusted if I got on board with a 70cl bottle, so the British Airports Authority deployed an army of securocrats to guard the gates of hell.
Like wash-bag fascists, these uniformed guardians seem to delight in humiliating passengers while enforcing ridiculous prohibitions. They preside with blank stares as elderly men shuffle in abject embarrassment through screening machines clutching beltless trousers in their fists to prevent them cascading into a puddle at their shoeless heels. The rest of us are bullied into acquiescing on their pointless regulations. 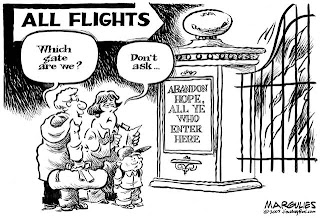 Once I was caught with shampoo in a container bigger than the approved 100ml. It was confiscated on the spot. Another time, I was put through the wringer for not having my few toiletries in the correct ziplock plastic bag. These come three at a time in a £1 plastic ball that won’t bounce, but each passenger is allowed only one bag.
So what to do with my scotch? I went to Heathrow early to check if there was any way of getting it on board. The woman on the Aer Lingus desk sympathised but said I would have to check in my carry-on bag. That’ll be an extra £24, thank you.
I considered other options:
• I could try and secrete it somewhere, but even someone schooled early in smuggling contraband across the Irish Border could not get through this checkpoint;
• I could break the seal and decant the whisky into small 100ml containers – if I could find those – and put them in a see-though ziplock bag. However, only five items are allowed in the bag, so 200ml would be lost.
• The most appealing prospect was to find a quiet spot and a glass and set about carrying the whisky on board in my bloodstream. However, this would render me incapable of finding the correct gate for my flight, much less drive my car from Belfast International Airport on arrival.
• Or I could throw a party offering fellow travellers a dream of a dram for Auld Lang Syne on the birthday of the immortal bard. However, I would need more than one glass for this.
The main disadvantage of all these options was that the whisky would be gone forever and with it the prospect of imbibing those hot embers from the gates of hell.
I was stumped and, in the end, I shelled out the cash to put my whisky in the hold where it would pose no threat to the safety of our flight.
Bagless in the departures lounge, I checked out the ‘World of Whisky’ – dozens of bottles from Scotland and Ireland with single malts ranging from £35 to £130. I thought of my much superior malt chugging its way to our Belfast reunion along conveyor belts, rattling on tractor trailers and languishing in the cold and dark hold. I knew it did not deserve such ill-treatment.
To add insult to injury, my bag was the last item on the luggage carousel, a good 15 minutes after all those carry-on smart travellers had departed the airport. For those agonising minutes, I imagined the ‘chuckers’ at Heathrow baggage handling had happened on a bottle of ’93.50’ and decided to toast the immortal bard.
However, it now sits intact on top of the shelf, but at 11.50pm on Burns Night, there’s time to break the seal, pour a dram and let those airport fascists go to hell. 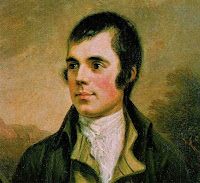 O Whisky soul o’ plays an’ pranks!
Accept a bardie’s grateful thanks!
When wanting thee, what tuneless cranks
Are my poor verses!
Thou comes – they rattle i’ their ranks
At ithers arses!
– Robert Burns, Scotch Drink
Posted by Darach MacDonald at 23:39