Blasts from the past

Ah nostalgia, they just don’t make it like they used to (as the old saying goes).
The thought struck me more than a few times over the Christmas/New Year season… all those ghosts of Christmas past, I suppose. And probably more so this year because of reminders that we are now entering a decade of momentous anniversaries, starting with this year’s centenaries of the sinking of the Titanic and Ulster’s Solemn League and Covenant, seen as the start of a political process that led to the partition of Ireland and all that ensued.

I prepared gently for the first of these by reading Omagh-born author Martina Devlin’s evocative novel Ship of Dreams. It starts with survivors on one of the Titanic lifeboats and charts their lives over the following year, during which perceptions and accounts of their shared momentous experience diverge because of need and circumstance.
As a consequence, I believe this year we will celebrate a great romance largely shaped by a 1997 Hollywood epic starring Kate Winslett and Leonardo DiCaprio.
I am still wrestling with the other centenary, but I consciously began preparing for it a few years ago while writing Blood & Thunder: Inside an Ulster Protestant Band.
On 28 September 2009, I attended an event at the Bridgetown No Surrender Orange Hall in Castlederg. It was ‘open to the public’ and the advertisement said it would feature an exhibition of relevant historical artefacts and a ‘cultural workshop’ marking the 98th anniversary of Ulster Day 1912.
The speakers included Lord Laird of Artigarvan, who would set the scene from the 1801 Act of Union up to 1912, and former Lord Mayor of Belfast Ian Adamson who would address us on the Covenant and its aftermath. The latter failed to show and Lord Laird, like a music hall warm-up, regaled us with anecdotes and quips about Ulster Scots, Border Reivers and his perplexity about whether his ancestry was English or Scots. The Covenant got a passing mention, but he admitted he was no expert.
Not listed on the bill, but topping the speakers nonetheless, was then Ulster Unionist Party leader Sir Reg Empey (above). He had ventured into the Wild West to rally retrospective support for his pre-emptive liaison with the British Tories. (He got short shrift on that from local unionist kingpin Derek Hussey!) So the ‘cultural workshop’ on a pivotal historical event, became an impromptu meeting of the UUP on an electoral pact with the Tories – which sent them into their next election disaster under the unfortunate acronym UCUNF!
I squirmed, aware that those present who knew me must be wondering what I – clearly from the other tradition – was doing there. A local Protestant farmer sitting beside me even ventured that, while he admired my willingness to hear about his past, this was not what he expected either.
Civilities were observed, of course, although my later attempt during tea and traybakes to open dialogue about the Ulster Covenant was repeatedly interrupted by Lord Laird eager to tell me that words I was uttering were Ulster-Scots! I finally remarked that, unlike him, I had no confusion about where I came from!
I have seldom spoken about that episode since, but it was a cautionary reminder that we are embarking on this decade of centenaries with little or no preparation and even less dialogue. The events we are about to celebrate, rather than commemorate, are so ingrained in our traditions that we cannot see the wood for the trees… and there is precious little interest in taking stock of timber.
Instead, we revel in exclusive versions and use them to bait each other. We know the outlines of the nationalist and unionist versions, of course, but there are northern and southern, eastern, western, local, global and whatever-you’re-having-yourself versions. Let’s not ignore the distortions of revisionists who take subjective trawls through the past, select what suits their current ideological line with little or no empirical research, and then convince themselves and others that they are above us all. We had plenty of that during 2011 without any centenary occasion!
Yet even after that 2009 night in the No Surrender Orange Hall in Castlederg, I persist in trawling, too, convinced there is scope for honest assessment of all the passions, fears, hopes, convictions and actions of those caught up in our shared past.
I began this from birth into a community shaped forever after by the events that began a hundred years ago. I continue my quest, driven by a conviction that I might find part of my own identity hidden by current interpretations reflected through the prism of ‘national’ soccer team allegiances.

The quest prompted my first book, The Sons of Levi, exploring the experience of proud, passionate Ulster Unionists consigned to the Free State by their fellow Covenanters in the six counties who even purloined their identity for decades afterwards by insisting ‘Ulster’ was different now. 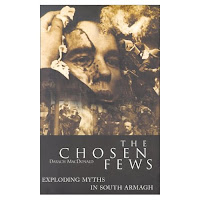 My subsequent book, The Chosen Fews – Exploding Myths in South Armagh, dealt with proud, passionate Irish people jettisoned by fellow nationalists in Dublin and demonised since.

My last book on Loyalist band culture, Blood & Thunder, dealt with those involved in a proud and passionate search for their cultural identity in another Border location.
Yes, there is a pattern and I don’t expect to be finished any time soon!
However, history is catching up because we are now into the decade of centenaries (although mine certainly doesn’t end in 1922). On which point, I note by today’s date that we have already passed what I would regard as one of the pivotal events of that period without a squeak or a peep from anyone else.
Unionist resistance to Home Rule diverged sharply following a meeting of the Ulster Unionist Council in late 1911 which decided to seek exclusion for Ulster from the Home Rule Bill which about to be enacted. Up to that point, Unionist opposition demanded no Home Rule for Ireland.
The first significant public event in pursuit of that separatist Ulster policy was a big rally in Omagh addressed by Sir Edward Carson, the Marquis of Hamilton and Lord Dartreyfrom Monaghan (whose ancestor, incidentally, proposed the Act of Union at Westminster in 1801). At least 30,000 Unionists attended, most conveyed there by train.
The railway timetable for Omagh that day lists 18 separate arrivals before 11.35am. One is the scheduled Belfast train through Portadown, as one might expect. The others show that those who came to Omagh to resist Home Rule for Ulster came on special trains from Castleblayney, Cavan, Bailieboro, Belturbet, Bundoran, Cootehill, Clones, Smithboro, Monaghan and Glaslough. Others certainly came from east Donegal on the special trains from Strabane and Derry and by other modes.
Today, the Great Northern Railway station is home for the Omagh Boys’ and Girls’ Club and the railway lines for all of Tyrone, Fermanagh, Monaghan, Cavan and Donegal, as well as for most of Armagh and Derry, are long-dead victims of partition.
Yet this was the start of a momentous year for Ulster and for Unionism and among the very first to pin their colours to the mast were those who gathered in Omagh on a day that is described in minute detail by the Tyrone Constitution of Friday, 12 January 1912.
I wonder now if any of them had even the least inkling that so many of those present would be jettisoned in 1920 as superfluous to need! They certainly couldnot have known that the recent 1911 Census would be used to support arguments that including all Ulster would become a constant nightmare for unionism because of the precarious balance of Catholics and Protestants that almost exactly corresponds to the sectarian breakdown in Northern Ireland today!

The memories of that day, and the significance of that inaugural event in the calendar that led to Ulster Day are lost, ignored and forgotten, perhaps because an honest look into the past is bound to disappoint and trouble too many.
So welcome to a decade of remembrance and amidst all the hype and hoopla in store, please remember that I am here to debunk much of the guff you will hear.
I’ll even undertake to attend workshops in Orange Halls, Hibernian hideouts, former railway stations or other venues on either side of the Border, not excluding political gatherings, confirmations, investitures and Bar Mitzvahs.
Posted by Darach MacDonald at 17:55