My first encounter with Aengus Fanning was on my very first day as a senior reporter for Independent Newspapers. I had come from Hibernia, where I had developed a particular interest in the meat-processing industry and its ‘colourful’ characters – cowboys with cash and butchers cutting a dash on a global counter.
For instance, I’d written an investigative profile of Larry Goodman, the man with the ‘biggest stake’ in the Irish economy! Nobody knew much about Goodman before that Hibernia article; it was reprinted by the Dundalk Democrat in Goodman’s home town, and in the Sunday Independent.
Perhaps that’s why I was hired by the Indo. For my part, I needed to finance a new family and home.
So there I was in Middle Abbey Street on my first shift, taking stock, when Aengus loomed in front of my desk. He fixed me with an unsmiling stare and introduced himself formally as Agricultural Correspondent.
‘I know you’ve written stories about agribusiness,’ he said coldly,and loudly, ‘but you will not do that here. That’s my area and you do not encroach on it without my approval … and I will not be giving it. Remember that.’
He turned on his heel and walked away. I sat dumbfounded while he made his way to his desk beyond the news editors, my face glowing from my public dressing down.

Aengus and I were colleagues (in the broadest sense) during my time at Independent Newspapers: we were never friends. He regarded me as an unwanted trespasser and we disagreed on most subjects, including the fundamentals of journalism.
I also resolved from that first day to get out as soon as possible. That happened when I was offered a better job with the new Sunday Tribune, ten months after passing through the portals of ‘Chateau Despair’.
During my time there, I learnt that such face-offs and in-house rivalries were commonplace. The then editor of the flagship Irish Independent Aidan Pender was about to retire. Successors were lining up and throwing shapes.
It affected us all. For instance, as general reporters, we were often instructed to ‘destroy our blacks’ (meaning we were to dump the carbon copies of typewritten stories) to prevent them being used by the next title. It was said jokingly that if the Evening Herald competed as well as it did against the (sister paper) Irish Independent, it might even take on the rival Evening Press.
I forged alliances. Then Sunday Independent editor Michael ‘Mixer’ Hand took me under his wing. We talked through the closing hours of Saturday night shifts in the Oval Bar. Mixer made no secret of being under huge pressure from rivals.
He showed up for my ‘going-away drink’, as did Vinny Doyle, Evening Herald editor. Vinny asked if there was anything I liked about Independent Newspapers. I told him I admired the ‘honesty’. He was surprised until I told him I meant the honesty of stabbing people in the front. He said he would use that himself … he did!
A few years later, Vinny was editor of the Indo and Mixer was out the door. I had seen off the Sunday Tribune and its short-lived cheeky sister, The Daily News. They collapsed at the end of 1982 and two tumultuous years.
I was now staffed at the Irish Press – where Mixer and Vinny had both learnt their craft – and had just been promoted to Agriculture Correspondent. I was back writing about Beef Barons.

At the Sunday Independent, meanwhile, new editor Aengus Fanning was shaping his ship. He nailed his colours to the mast, hired a crew of like-minded opinionators, dolled up his broadsheet with tabloid take-offs and pushed ‘personality’ journalism – where the reporter is central to the story – to deadly lengths.
He had bust-ups (and at least one full-scale fistfight), fall-outs and scurrilous campaigns, the most virulent against subsequent Nobel Peace laureate John Hume. His star Veronica Guerin was shot dead by drug criminals she baited on the Sindo’s front page. There were climb-downs, pay-offs and put-downs.
Backed by a Bean Baron, Aengus’s star rose steadily, seeing off the fatally mismanaged Sunday Press and stifling the resurrected Tribune by placing it in financial bondage. It clambered to the top with half the circulation of the Sunday Press in my time.
But it consistently lost readers as Aengus traded in ‘tottie’ and tittle-tattle, backed Bertie and Britain’s war on Iraq, shored up Seanie and fawned to Fingers, while inflating the bubble and roasting those he set his mind against.
Yet nothing succeeds like excess and he pronounced that only commercial success counts in journalism. Those who hail his death as the passing of Ireland's 'greatest editor' appear to agree.
Of course Aengus always had his champions, especially among those he elevated. One wrote this week: ‘He was brave to the point of bravado. He challenged all the accepted norms. More than 20 years ago he blazed a trail in his utter fearlessness in confronting all the undisturbed pillars of Irish life. Whether it was the Catholic church, Fianna Fáil or the IRA.’ (sic) 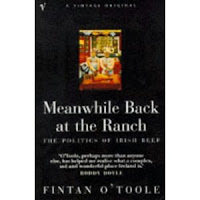 Life moves on and so do we. In 1986, I approached a few publishers with a proposal for a book on the Beef Barons. They declined. One said, 'Only farmers would be interested in that and farmers don’t read books.’ A few months later I moved to Canada. I had barely established a new career in journalism there when a bestseller emerged from the Beef Tribunal scandals back in Ireland. It made very familiar reading!
I’ve worked in a dozen newsrooms on both sides of he Atlantic Ocean over the past 35 years. I’ve learned that journalism is a craft honed on competition and collaboration. It thrives on mutual support, on mentoring and encouragement of those coming behind. As a reporter and editor, I’ve worked with many who disagreed strongly with me on a host of issues and I am proud to have had them as colleagues and friends.
On one occasion, I was exposed directly to the dark side of journalism. It came on that day when Aengus Fanning loomed like an avenging angel in front of my desk and smote me publicly.
He probably forgot his beef with me. I didn’t.
Posted by Darach MacDonald at 00:31