Haunted by my past with Twink 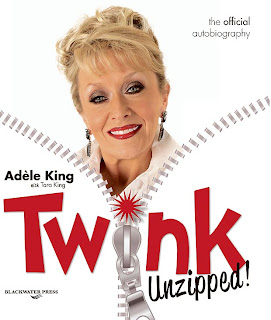 While others quake at the prospect of Twink Unzipped, the autobiography of colourful Dublin entertainer Adele King, I’m betting she doesn’t disclose my personal part in her secret past.
But just in case it turns up in one of those extracts in The Irish Sun or even in revised text for the delayed publication of the book some time in the new year, I’ll come clean myself. And so I hereby reveal that I was once the ghost writer for Twink’s ‘Agony Aunt’ column in the Daily News back in the early 1980s.
Yes, it is true that while a giant Twink smiled down on us like a star from Dublin billboards and trundled along the streets of the capital on side-of-the-bus ads as our resident font of wisdom on troubled relationships, I lurked in the shadows writing the actual column.
It was just a minor part of my otherwise important duties at the Daily News, of course, as we struggled to establish Ireland’s first fun-sized daily tabloid in 1982.
The drill was that I would meet Twink for lunch, discuss a range of letters (mostly penned by me to kick-start a suitable flow of correspondence from readers), note her comments and then go off to write up the cheeky column for that week with the assistance of several glasses of good wine for inspiration.
The subjects of the letters, as I recall, were not always the 'run of the mill' troubled personal relationships and needless teenage angst that readers could find elsewhere. We also sneaked in some subjects that we knew would be regarded as quite risqué or even slightly sordid by the social mores of the time.
Our aim was to provide a contemporary spin on the traditional Irish advice column (as provided by veteran columnists of a previous generation such as Angela McNamara of the Sunday Press and Frankie Byrne of RTÉ). After all, we were providing a modern no-holds take on Irish life in the bright and breezy pages of our full-colour tabloid at a time when rival daily newspapers were uniformly grey and conventionally boring. Looking back with the wisdom of age, I suppose we were aiming in our youthful enthusiasm for the Liffyside equivalent of Sex and the City, long before even the Big Apple was ready for it.
At least that was the brief I took along to lunch at one of Dublin's trendier restaurants of that time.
Mind you, Twink spent a lot of our time together talking about her impending marriage to David Agnew (the core subject of much of her impending autobiography, I understand), and I was expected to offer my own advice on that too… but not in writing, I hasten to add.
In any case, no matter what is disclosed in the fall-out from Twink Unzipped when it actually reaches the bookshops, I accept no responsibility for what transpired because we only had a few lunch dates before the column folded (along with the newspaper) – and that was more than 20 years before her marriage came unzipped!
I had long given up my ghost role as an Agony Aunt by then.
Posted by Darach MacDonald at 17:24